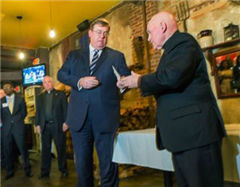 In 2015, alumnus William A. Hagan, SHP Class of 1950 left Seton Hall Prep a planned gift from his estate in the amount of $200,000.
Following Mr. Hagan's graduation from The Prep, he attended Georgetown, followed by a three-year stint in the US Air Force. He then earned a law degree from Columbia Law School, followed by a career at Shea & Gould, a well-known national law firm, ultimately becoming a partner there. William Hagan passed away in December 2013. He believed deeply in what The Prep had done for him as a young man and how it laid the foundation for his career success and his life of service. The mentoring he received at The Prep stayed with him his entire life. As a result of Mr. Hagan's gift, his name has been permanently memorialized through the naming of a Prep Mentoring Program to the William A. Hagan Jr. '50 Mentoring Program.
Back