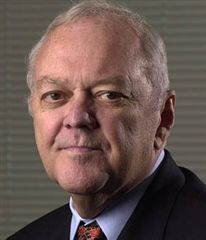 Journalist, Executive, CNN Co-Founder
Wussler began his career at CBS in 1957, working in the mailroom. He rose through the ranks to become the youngest president of the network at the age of 40.

Within weeks after joining CBS in 1957, Wussler became a production assistant, eventually rising to be an executive producer and a director of special events. From 1972 until 1974, Wussler served as the general manager of CBS-owned WBBM-TV in Chicago.

Wussler returned to CBS headquarters in 1974 as vice president of CBS Sports. He then became the head of the network in 1976. Wussler played himself in a small cameo appearance in the 1977 film Black Sunday, which was partially filmed at Super Bowl X.

In 1978, Wussler formed his own production company, Pyramid Enterprises. Two years later, he joined Ted Turner at Turner Broadcasting in Atlanta, eventually going on to co-found Cable News Network. He also was Executive Producer of Night Tracks from 1983 to 1989 and President of Cable Music Channel in 1984.

From 1989 until 1992, Wussler was Chief Executive Officer of Comsat Video Enterprises, Inc., where he joined with the Metromedia Company as initial investors in a company that eventually became Metromedia International Telecommunications, Inc., developing independent cable television and cellular telephone systems in the former Soviet Union.
From 1992 until his death, Wussler ran the Wussler Group, a consulting company.
Back