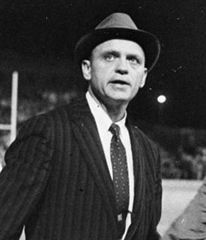 Holovak, one of six children and the youngest of five sons of Czechoslovakian immigrants, grew up in the coal mining town of Lansford, Pennsylvania. After playing sports at Lansford, he attended Seton Hall Prep School where he was named to the All-New York Metropolitan team by the New York World Telegram. Frank Leahy, an assistant at Fordham, scouted Holovak. When Leahy became the head coach at Boston College he asked Mike to play football at B.C. and the rest is history.

Holovak as a sophomore fullback soon proved he didn't have to take a back seat to anyone and could hold his own with the best of them. At 6-foot-l, 205 pounds Holovak scored touchdowns in two famous BC victories. One victory was a 19-18 win over Georgetown and a touchdown against Tennessee in the Sugar Bowl.

In 1942 Boston College played Alabama in the Orange Bowl where Holovak scored three touchdowns, averaging 15 yards per carry. Mike was a consensus All-American selection, named to the first team by AP, NEA, New York Sun, UP, INS, New York News and Grantland Rice. That same year he was fourth runner-up for the Heisman Trophy.

On April 8, 1943, the Cleveland Rams, who had earlier announced they were suspending operations for the duration of World War II, drafted Holovak in the first round. Holovak then enlisted in the United States Navy, going on to command a PT boat in the Pacific that sank 14 Japanese ships. However, despite his heroics, he was dealt a heavy personal blow when his brother Pete lost his life during the four-year conflict. The Holovak family had four sons in World War II, at the same time. Another difficult time for Holovak was becoming ill with malaria.

Holovak officially signed with the Rams on December 29, 1944, but didn't take the field until 1946, by which time the franchise had relocated to Los Angeles. During his one season with the team, he gained 211 yards and scored three touchdowns.
Traded to the Chicago Bears on January 27, 1947, Holovak would lead the pass-oriented Windy City squad in rushing during each of the next two years and also scored three touchdowns.

After his two years in Chicago, Holovak retired on March 1, 1949 to become the freshman football coach at his alma mater. After two seasons in which he compiled an undefeated record, he was promoted to head coach at Boston College on December 30, 1950, following the resignation of Myers.

In his first five years, Holovak compiled a mark of 24-16-5, winning Coach of the Year honors in 1954 from New England football writers. Those efforts were good enough to earn him a new four-year contract on November 22, 1955, but even after four more winning seasons, he was fired on December 3, 1959. Holovak's record with Boston College was 49-29-3.

Holovak was selected as the first personnel director of the Boston Patriots in 1960. Saban was fired on October 10 and was replaced by Holovak. Finishing with a 9-4-1 record, Holovak matched that record the following year, earning him a new three-year contract, with an option for another year.

In 1963, the Patriots reached the postseason for the first time, despite only compiling a 7-6-1 record. They then defeated the Buffalo Bills in an Eastern Conference playoff, but were then pounded in the AFL Championship game, 51-10, by the San Diego Chargers. The next year, Holovak added the duties of general manager to his job description, and after the team improved to 10-3-1, he was named AFL Coach of the Year.

However, the veteran unit slipped to 4-8-2 in 1965, but rebounded into contention the next season with the addition of rookie running back Jim Nance. Needing only a victory in their final game against the New York Jets on December 17 to reach the AFL title game, the Patriots instead saw their 1966 season end with an 38-28 upset loss. The defeat was softened somewhat when Holovak again won the league's Coach of the Year accolade.

Age finally caught up with the team over the next two years, and the end result was that Holovak was fired from both positions on January 7, 1969, ending his Patriots tenure with a mark of 52-46-9.

Will McDonough wrote in the Boston Globe, "Billy Sullivan founded the Patriots, but the guy who saved it was Mike Holovak's personality - love his players had for him that kept the team afloat in its first decade of existence." The team and Mike knew if they did not produce that Boston could lose their franchise and it would be a long time before they received another team. They were the pioneers of the New England Patriots.

After his tenure with the Patriots, Holovak was an assistant coach with the 49ers for two years. Holovak remained in the Bay Area by accepting the post of receivers coach with the Raiders on March 6, 1971. Returning to the East Coast Holovak was running backs coach for the Jets and then moved into the Jets' front office following the 1974 NFL season as Director of Player Personnel.

He remained in that role for two seasons, but when Jet's head coach Lou Holtz resigned before the final game of the 1976 season, Holovak handled the duties in a 42-3 loss to the Cincinnati Bengals on December 12. He then announced his resignation on May 20, 1977, citing personal reasons.

In 1980, he was elected to the National College Football Hall of Fame then returned to football on February 15, 1981, when he was named executive vice-president of the Houston Oilers to help rebuild the team following the departure of popular head coach Bum Phillips. Holovak is known for evaluating football talent, and not just the number one's, but lower draft choices, as well. He scouted Warren Moon, Bruce Matthews and Mike Munchak, who are in the Pro-football Hall of Fame, but is just as proud of the free agents and lower draft choices he chose with the Oilers.

After Ladd Herzeg left the Oilers because of a contract dispute Mike was named general manager, February, 1989. He remained in that role until the end of 1993 NFL season, as the Houston Oilers made the playoffs each of those five years. Holovak finished his football career as a scout for the franchise, which later moved to Tennessee. Holovak retired for good in 1999, at the age of 79.