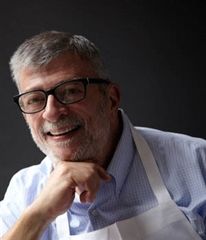 Executive Pastry Chef, Author
Nick Malgieri, former Executive Pastry Chef at Windows on the World, is a 1996 inductee into Who’s Who of Food and Beverage in America. His twelfth and latest book is NICK MALGIERI'S PASTRY: FOOLPROOF RECIPES FOR THE HOME COOK (Kyle Books, 2014), which followed on the heels of BREAD (Kyle Books, 2012) and BAKE! Essential Techniques for Perfect Baking (Kyle Books, 2010). He is also the author of The Modern Baker (DK Publishing, 2008), which was nominated for an IACP award; CHOCOLATE (HarperCollins, 1998), winner of an IACP/Julia Child Cookbook Award for best baking book of 1998, voted Best Chocolate Book in the World by the 1998 Salon International du Livre Gourmand, and included in Food & Wine magazine’s Best of the Best for 1998; and HOW TO BAKE (HarperCollins, 1995), the recipient of a James Beard Foundation cookbook award for best baking book of 1995.

In 1998 and 1999, he was voted one of the ten best pastry chefs in America by Chocolatier and Pastry Art and Design magazines. A graduate of the Culinary Institute of America, he apprenticed in Switzerland and was subsequently employed at the Hotel de Paris and the Sporting Club in Monte Carlo and at the Reserve de Beaulieu in France. In New York he was Assistant Pastry Chef at the Waldorf Astoria; Executive Chef at Paine Webber, Inc.; and Pastry Chef at the Board Room, a private club.
Malgieri began teaching in the New School Culinary Arts Program in 1979 and in 1981 became chairman of its Baking Department. He developed and taught the professional baking curriculum for the New York Restaurant School and authored the baking section of the Restaurant School’s textbook. A founder and owner of the Total Heaven Baking company, Malgieri has served as consultant to Inhilco, Inc. and restaurants and pastry shops throughout the United States. He has developed recipes for a variety of food producers, and for Food and Wines From France and A.I.D.I., the Italian Confectionery Industries Association. He also serves as American national spokesperson for the Switzerland Tourism Gastronomy and Wine program.
Currently, Malgieri directs the baking program at the Institute of Culinary Education (formerly Peter Kump’s New York Cooking School) and frequently serves as a guest teacher at many cooking schools. Since 1985, he has appeared at culinary events throughout North America, and at the Smithsonian Institution. Malgieri’s recipes have been published in the Food section and writes a monthly column for Tribune Media Services, which appears in newspapers all over the United States. He has also written for the , and Cook’s Illustrated. He is a contributing editor of Dessert Professional magazine and has been the American correspondent for the Italian magazine La Pasticceria Internazionale and editor of Dolce Italia, a publication of the Italian Trade Commission.

Malgieri has appeared on local television throughout the United States, as well as on all the national morning shows. Other television credits include Chef du Jour, Cook’s Choice, Bakers Dozen, Cooking Live, and Sara’s Secrets on the Food Network and appearances with Julia Child on Baking with Julia, as well as with Martha Stewart. He also appeared with Vincent Schiavelli in the PBS series The Chefs of Cucina Amore.

A Certified Culinary Professional and member of the International Association of Culinary Professionals, Malgieri has served as chairman of its certification committee. He has been a member of the Board of Trustees of the IACP culinary trust. A founder and member of Bakers Dozen East, he also holds membership in the Federazione Italiana dei Cuochi, the Amicale Culinaire de Monaco, and the Société Culinaire Philanthropique de New York. In 2003 he was made a Chevalier de l’Ordre de la Channe du Valais for his efforts in promoting Swiss gastronomy and culture in the United States, and in March 2006 he received the Philadelphia Toque Award for exceptional achievement in culinary writing and accomplishments.
Back