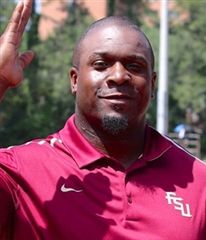 Throws Coach at FSU, Olympian (London 2012)
Now in his fourth season as the Seminoles’ throws coach, Dorian Scott has built a stable of talent on the men’s and women’s sides that is re-writing the Florida State record book. The Seminoles are already making significant strides under the tutelage of the two-time Olympian and former All-American at FSU, who hit the ground running in 2012 just a month after becoming the first Jamaican thrower to reach the Olympic finals in the shot put, finishing 10th at the London Games.

Scott has not wasted any time establishing the Noles as a force at his second home - he was raised in New Jersey, starred for the Seminoles and served an apprenticeship as a volunteer assistant in Tallahassee – after a remarkable first-year coaching performance at San Diego State.

In his first two outdoor seasons alone, Seminoles Chelsea Whalen (shot put), Kellion Knibb (discus) and Katja Vangsnes (hammer) established new school records under Scott’s guidance. Three of the top 10 marks in the women’s shot put and discus, and two in the hammer, have also been produced by his athletes. Indoors, Briana Cherry-Bronson, Lakitta Johnson and Sasha-Ann Lebert hold down the top three weight throw marks in school history, while Whalen, Knibb and Johnson occupy three of the top five positions in the shot put.

Needless to say, there have been significant contributions from the throws as the Seminole men have won three consecutive ACC men’s outdoor titles, highlighted by Jeff Pelage’s discus gold, Stargell Williams’ silver shot put finish and Markindey Sineus’ hammer bronze in 2013. Led by Sineus’ runner-up finish in 2014, the Noles also received scoring performances from freshmen Chad DaCosta and Austin Droogsma in the discus and shot put, respectively. FSU throwers piled up 17 throws points en route to the 2015 outdoor title.
On the women’s side, Whalen and Knibb won 2013 ACC Outdoor titles in the shot put and discus, respectively, as the Noles nearly pulled off the team title team. A year later, FSU finished the job with Knibb claiming her second consecutive discus title, with Whalen and Johnson scoring in the shot put and Vangsnes and Cherry-Bronson adding hammer points for a total of 19. The Noles won their first team title since 2009 by a 15-point margin.
Knibb has been FSU’s most decorated thrower under Scott’s watch with the Seminoles, highlighted by an amazing 2014 season which saw her capture Penn Relays, ACC and NCAA East Preliminary discus titles. The sophomore set the Jamaican national record at the NCAA East Preliminary meet (61.34m/201-3) and went on to become the first FSU woman to earn All-American honors by placing fifth at the NCAA Championships. She followed that up by winning the Jamaican National Championship and finishing sixth at the Commonwealth Games in her first international competition as a senior athlete.
Knibb followed up by claiming the 2015 ACC Indoor title in the shot put, her secondary event, before an injury sidelined her for the outdoor season.

Scott has incorporated some of the coaching techniques from Harlis Meaders, his coach at Florida State and the man he succeeded, while adding his own touch. He has applied the same tireless work ethic and approach to conditioning and preparation that catapulted his own career.

Scott’s ascent from a 64-foot high school thrower to the No. 2 shot putter in FSU history (66-4) and a first-team All-American in 2005 was dramatic. He still holds the Mike Long Track record (70-4.50), which he set as a professional in 2008 prior to representing Jamaica in the Beijing Olympic Games.

Scott graduated from Florida State in 2007 and previously served as a volunteer assistant with the Seminoles, working directly with Meaders, his predecessor. In his lone season at San Diego State, Scott helped Whitney Ashley capture the 2012 NCAA Outdoor title in the discus. Since returning to Tallahassee he has developed quite a reputation as a recruiter - especially in Jamaica - not only of athletes in his own event area, but also in the sprints and jumps as well.
Back