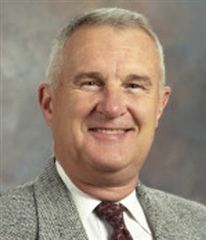 US Naval Academy Graduate, Coach, Director
A native of Baltimore, Md., Smalley served five years in the United States Marine Corps, where he was named to the All-Marine Basketball Team four years.

In 1962, Smalley returned to the Academy as an assistant coach with the men's basketball team and as a member of the Physical Education Department. In 1966, Smalley succeeded Ben Carnevale as head coach of the Navy basketball team. Under his 10-year direction, Navy produced regular winning seasons and was ranked among the top 10 in the country in team defense in three of his last six seasons.

In 1976, Smalley left his post as the men's coach and later that year was asked to lay the groundwork for a women's basketball program. His first season leading the women, competing at the junior varsity level, he led the Mids to a 10-1 record and won the Maryland AIAW state championship for small colleges. The program achieved varsity status in 1977, and he guided the Midshipmen to a 12-year combined record of 179-119 that featured 10 winning seasons. Smalley's teams recorded back-to-back 18-win seasons in 1981-82 and 1982-83, and the 1986-87 team finished 18-8 and captured the ECAC South Division II Championship.

Smalley held the title of Assistant Director of Athletics in charge of admissions since 1979 and was promoted to Senior Associate Athletic Director for Admissions, Academics and Compliance in 2001. In that capacity, Smalley handled the admissions process for recruited athletes in each of Navy's 31 varsity sports. Smalley and his staff also monitored the academic progress of Navy's 1500 student-athletes.
On Jan. 7, 2005, Navy officially named the basketball court at Alumni Hall "Dave Smalley Court" in honor of his numerous contributions for the basketball program.
Back