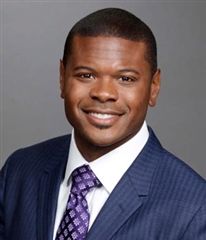 Sports Director, CBS Philadelphia
Emmy-Award winner, Don Bell, whose first major market sports casting job was a CBS 3 in Philadelphia a decade ago, is now the Sports Director. Bell served as CBS 3's weekend sports anchor and sports reporter from 2005 until 2010. He rejoins CBS 3 from FOX Sports 1 in Los Angeles where he has been anchor of FOX Sports Live and in-studio anchor for FOX College Hoops along with other productions. He has also been co-host of the nationally-syndicated Don Bell & Ryan Field Show on FOX Sports Radio. Previously, he was at ESPN for three years as studio host for SportsCenter on ESPN News.

Bell began his career in 2002 at WWSB-TV in Sarasota, Florida, later anchoring sports for KPLR-TV in St. Louis while hosting the post-game shows for the St. Louis Cardinals.

According to Bell, the Philadelphia sports fan played heavily in his decision to come home. "I miss how this town lives and dies with every big victory or crushing defeat. You can learn a lot of things in life, but you can't teach passion. Philly overflows with it."

CB3 (KYW-TV) is part of CBS Television Stations, a division of CBS Corporation.
Back