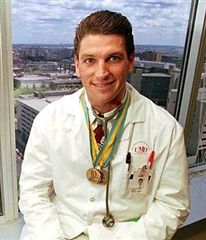 Former Olympic Swimmer,  MD
Ron Karnaugh first competed internationally at the 1986 Goodwill Games and then made virtually every US national team through the 1998 World Championships, despite attending medical school beginning shortly after the Barcelona Olympics, graduating from the New Jersey College of Medicine and Dentistry in 1997. In 1992 Karnaugh was the top-ranked swimmer in the 200 individual medley, and was expected to medal at Barcelona. But at the Opening Ceremony, his father, Peter, while watching his son march into the Olympic Stadium, suffered a heart attack, collapsed, and died. Ron Karnaugh knew nothing of this until later that night when USOC Executive Director Harvey Schiller and Board member George Steinbrenner came to his room in the Olympic Village to tell him. Steinbrenner, well-known as the owner of the New York Yankees, saw that his mother was concerned about how they would pay for Ron’s medical school, starting that fall, but Steinbrenner told them not to worry, and financed the schooling of the man he would later call “Doctor Ron.”

Karnaugh was a frequent medalist at international competitions, winning a bronze at the 1996 Pan-Pacifics in the 200 IM, two bronzes in the 1996 short-course Worlds, a silver at the 1998 Goodwill Games in the 200IM, and a bronze in the 200IM at the 1998 World Championships. In 1993 he broke the American record in the 200IM. Now a practicing interventional physiatrist, Karnaugh continues to swim and win in masters’ competitions.
Back