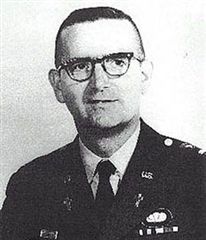 Medal of Honor Recipient
Rev. Charles J. Watters '45 was a Chaplin (Major) in the United States Army. He was posthumously awarded the Medal of Honor for bravery exhibited while rescuing wounded men in the Vietnam War, specifically, the Battle of Dak To. Chaplin Watters is one of seven chaplains to receive the Medal of Honor.

Watters was an active private pilot, flying small single-engine planes as far as Argentina. In 1962, Watters became a chaplain with the New Jersey Air National Guard. In 1964, he entered active duty as a chaplain with the U.S. Army. He began his first 12-month tour of duty in Vietnam on July 5, 1966. During his first tour, he was awarded the Air Medal and a Bronze Star for Valor. At the end of his first twelve months, in July 1967, he voluntarily extended his tour for an additional six months.
Chaplain Watters also made the parachute drop in Operation Junction City, 22 February 1967.

On November 19, 1967, Chaplain Watters' unit was involved in close combat with the enemy. For his "conspicuous gallantry ... unyielding perseverance and selfless devotion to his comrades" on that day, Chaplain Watters was posthumously awarded the Medal of Honor. Watters is buried in Arlington National Cemetery.
Back