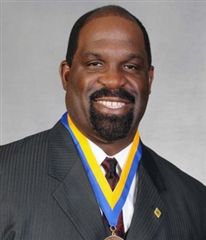 Coach, Former NFL Player
At Seton Hall Prep, Stanley was 1st team All-State, 1st team Parade AllAmerican and 1st team All USA Today All-American his senior year. He played in two consecutive state football championship games, and his junior year team was undefeated (11-0), and ranked 3rd in the state. With over 120 scholarship offers, Stanley accepted a full athletic scholarship to The University of Pittsburgh, where in his senior year he was named 1st team All-American again. There, Tony is the third alltime sack leader in school history with 31 sacks.

Stanley was inducted into the Seton Hall Prep Hall of Fame, his hometown “Newark Athletics Hall of Fame” and was selected by the Men of Essex as the Essex County Outstanding Athlete in 1983. In 1987, Stanley was the 1st round draft pick to the Seattle Seahawks, a feat even more impressive because he was the first ever New Jersey football player to be taken in the 1st round of the NFL draft. Stanley played ten years in the NFL (six years on the Seahawks, one year on the Rams, and three years with the Redskins.) He played in 145 games, starting in 125.

He then became the Defensive Coordinator on the first ever state football championship team at Newark West Side High School in 2007 and was responsible for getting West Side into the state football playoffs for three consecutive seasons.
Back