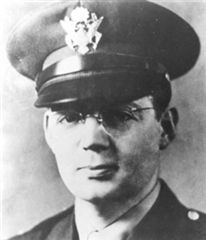 Recipient: Distinguished Service Cross and Purple Heart
Rev. John P. Washington entered Seton Hall to complete his high school and college courses in preparation for the priesthood. He graduated in 1931 with an A.B. degree. He entered Immaculate Conception Seminary in Darlington, New Jersey and received his minor orders on May 26, 1933. John excelled in the seminary, was a sub deacon at all the solemn masses, and later became a deacon on December 25, 1934. John was elected prefect of his class and was ordained a priest on June 15, 1935.

Father Washington’s first parish was at St. Genevieve’s in Elizabeth, New Jersey, and then he served at St. Venantius for a year. In 1938, he was assigned to St. Stephen’s in Arlington, New Jersey. Shortly after the Pearl Harbor attack of December 7, 1941, he received his appointment as a chaplain in the United States Army. Father Washington went on active duty May 9, 1942. He was named Chief of the Chaplains Reserve Pool, in Ft. Benjamin Harrison, Indiana. In June 1942, he was assigned to the 76th Infantry Division in Ft. George Meade, Maryland. In November 1942, he reported to Camp Myles Standish in Taunton, Massachusetts and met Chaplains Fox, Goode and Poling at Chaplains School at Harvard.