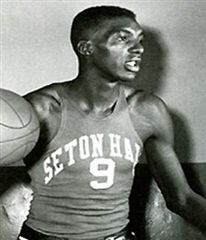 NBA Player
Walter Dukes, a 7-foot center who set the N.C.A.A. single-season rebounding record, led Seton Hall University to the National Invitation Tournament championship in 1953, and then played for eight seasons in the National Basketball Association. Dukes pulled down 734 rebounds in 1952-53, a N.C.A.A. Division I record that still stands. He led Seton Hall to a 31-2 record and the N.I.T. title.

After being named an all-American, Dukes was drafted by the Knicks, but instead accepted a lucrative offer from the Harlem Globetrotters. He played two seasons with them before joining the Knicks.

Dukes was hampered by a knee injury in his rookie N.B.A. season, then was traded by the Knicks to Minneapolis. He played one season for the Lakers and six seasons for the Detroit Pistons and averaged 10.4 points a game over his career. He was the Pistons' fourth-leading career rebounder, with 4,986, and was named twice to the N.B.A. All-Star team.

A native of Rochester, Dukes moved to South Orange, N.J., in 1948 to attend Seton Hall Prep. In his three years at Seton Hall University, he brought the Pirates to basketball prominence. In his senior year, he averaged 26.1 points and 22.2 rebounds.
Back